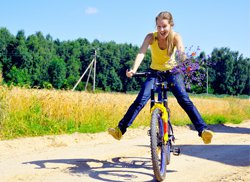 Barbara caressed the hard-book cover. The excitement of what was within made her cheeks flush. Before opening it she took a look around the library to see that nobody was watching. Rationally it made no sense. It was as if what she was doing was deeply shameful and should be kept at home. After all she was just in a library reading. She knew that that was the whole point of going to a library, the love of words. The man at the end of the aisle looked back at her. She realized she was staring.

Snapping her eyes down, onto the mouth of the still shut book, she gently opened it. The spine had already been cracked, but there was a slight hint of the glue. She closed her eyes and stuck her nose down into it and took a deep breath. Blood rushed through her body as the smell spread through her body.

She opened her eyes and let them fall on the title.

She hated titles. She just wanted to get straight to the action.

“Of Mans First Disobedience, and the Fruit

Of that Forbidden Tree, whose mortal tast

Brought Death into the World, and all our woe,

She tasted the word “disobedience” in her mouth. She let it roll around. But it didn’t quite work for her. A bit disappointed she continued.

With loss of Eden, till one greater Man

Restore us, and regain the blissful Seat,

Of Oreb, or of Sinai, didst inspire

That Shepherd, who first taught the chosen Seed,

In the Beginning how the Heav'ns and Earth

Rose out of Chaos:”

None of that was even close. She got a bit frustrated. This was supposed to be a 17th century poem. Where are the long words? She skipped a bit. The first three pages had nothing. Just short boring words. Her luck changed on page four.

Extort from me. To bow and sue for grace

With suppliant knee, and deifie his power,

Who from the terrour of this Arm so late

Doubted his Empire, that were low indeed,

That were an ignominy and shame beneath

This downfall; since by Fate the strength of Gods

And this Empyreal substance cannot fail,

As her eyes fell on “ignominy” her knees almost buckled. She licked the “g”, dove into the “o” and lapped up the double bounced ecstasy of the “i” and the “y”. Her breathing turned heavy. Before she’d managed to calm herself down, just two rows below “Empyreal” found her. The “E” thrust itself into her mouth. The “p” exploded into the “y” and the “real” rolled its way into sedated bliss.

She caught herself almost dropping the book. She squirmed as blood flooded to her pussy. She wondered if anybody had seen her. Straightening her long dress and cardigan she straightened her back and looked around. Her eyes met the man at the end of the aisle again. He smiled at her. She looked away. Tucking a lock of hair behind her ear she started searching again.

She skipped a bit, and tasted some of the Hebrew names in her mouth, “Eleale”, “Thammuz”, “Cherubim” or “Ashtaroth”. None of them worked for her. They were too foreign, too uncomfortable in her mouth, like lovers not showing her the respect she needed. She skipped some more, and picked a section at random.

All these and more came flocking; but with looks

Down cast and damp, yet such wherein appear'd

Obscure some glimps of joy, to have found thir chief

Not in despair, to have found themselves not lost

In loss it self; which on his count'nance cast

Semblance of worth, not substance, gently rais'd

“Count’nance” caught her fancy. It started and stopped, as if hesitant. Keep going her mind yelled. “nance” was like taking a bounce off a trampoline, and then landing in a soft embrace. She whispered the word over and over holding her mouth to shield it. She licked her dry lips.

Before being allowed to continue a bespectacled girl walked up behind her, eyes boring into her.

“Sorry, excuse me”, she mumbled as she brushed past.

Barbara hid her eyes out of shame. She just knew that the girl had seen her and knew it all. Her disapproving beady eyes told it all. Once gone Barbara continued and hoped she could get into it again. It didn’t take long.

Thither, if but to pry, shall be perhaps

Our first eruption, thither or elsewhere:

For this Infernal Pit shall never hold

“Thither” caught her by surprise. It was a bit short for her, but it was like a teasing. Like a kiss on the cheek instead of what she’d been expecting. It both frustrated her and turned her on more than ever. She just wanted more.

She skipped ahead to book two.

Let such bethink them, if the sleepy drench

Of that forgetful Lake benumb not still,

That in our proper motion we ascend

The loud bang as the heavy book hit the floor brought her from her state of ecstasy prematurely. She was flushed and her hair was in a mess. She bent down to pick it up, uneasy about her warm sweaty body. It was as if everybody else in the library knew what she had done. With shaking hands she searched for its home.

Barbara’s heart stopped in panic. She could hardly breathe. In the corner of her eye she saw the man from the end of the aisle had walked up to her. He was smiling and had eyes up to no good.

“Paradise Lost. That’s heavy stuff. I like a girl who can appreciate quality.”

These words fell on her accusingly. He knew it all. Panic rose up within her. All thoughts where a muddle now, swirling and flickering malevolently. The smiling man didn’t move, only stood fixing her with a confident gaze. All Barbara could do was to stammer out an excuse.

Without looking back she turned and fled. Her heart beat violently in her chest as she ran all the way home without stopping.

" Being powerful is like being a lady. If you have to tell people you are, you aren't."

Just kidding. This is not interesting text at all.

But don't let me keep you from reading, if you enjoy this stuff.